An unholy alliance between the Luciferian and anti-cosmic forces of Dødsritual and Black Command, united for eternity on a crystal clear lathe-cut piece of vinyl. Hailing from the cold and mystic Norway is Dødsritual, an act that started out in 1993 as Ravner, only to bring two great albums under the moniker of Hat, and now renamed to Dødsritual, after releasing their first full-length earlier this year, this unholy duo brings you “Sons of Disobedience”. A ritualistic occult piece of art that can easily match up with the masters of the genre like Acherontas or Nightbringer. The past years The Netherlands is the breeding nest of qualitative and innovative black metal. Black Command being amongst the most promising new comers in the scene. Their Luciferian black masses have just started emerge from the underground. On this release they present “Temple Nightside Revelation” one of their best songs so far. This split 7” EP is limited to 50 hand-numbered copies only! Never to be made again. If you want to own this piece of black metal magic than you better order it fast. Pre-orders can be send to lafawijn@gmail.com , to save on shipping costs check http://lafawijn.blogspot.nl for additional items to order.  Price is 12 euro plus shipping. This EP will be unleashed the 1st of July!

Check out their music here:
https://youtu.be/45GzVIY9SRc 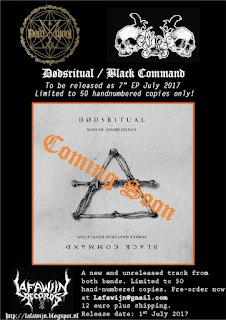 Posted by Lafawijn Records at 5:15 AM 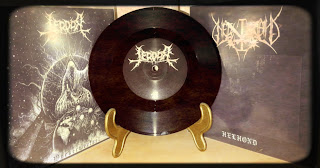 Three of the best Dutch underground black metal bands joined forces on one CD. Naagauk, Verdorven and Genocida together bring you more than 45 minutes of pure Black Metal hatred. All three bands have recently released outstanding material on tape. But now they present their black art for the first time on a noble digipack CD. This digipack CD is limited to 150 handwritten copies. You can pre-order this digi-CD now for only 10 euro by sending your order to lafawijn@gmail.com 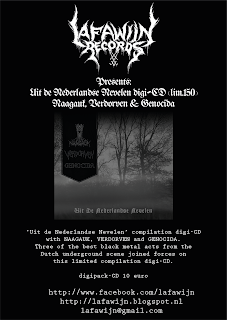 Posted by Lafawijn Records at 12:48 PM